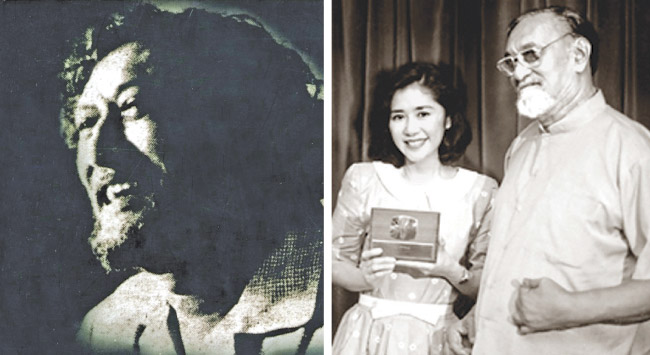 The eighties was a tumultuous decade for reasons we still haven’t come to terms with. For the lack of a better way of putting it, everything changed. Including the media and television, one can add.

Sri Lanka didn’t really have professional TV people back then, so most if not all of those handpicked and taken into revolutionising the idiot box (as it was and is called) came from the cinema. They were professionals in that sense only, yes, but at the end of the day what they did was more than enough to salvage a medium which could have deteriorated in lesser hands. Among those who figured in this revolution, we can point at some names. Like Titus Thotawatte.

Titus knew his audiences. He knew them so well that what he ostensibly produced for children caught the adult too. He went for films which, no matter how slickly they could have been conceived, took on a life of their own and that owing to what became his forte, editing. He gave us a cinema our children could claim and, when taken to television, gave them a series of programs which notwithstanding the many programs which have invaded the medium since remain unsurpassed in their appeal. There must have been a child in the man, of this I am certain.

Emmanuel Titus de Silva was born to a family of five children. From an early age, he loved the fine arts and in particular, drawing. Educated at Ananda College, young Titus was taught art by two giants in the field at the time, J. D. A. Perera and Stanley Abeysinghe. He loved the movies too, though I do not think he entertained a career with them beyond the Government Film Unit when he joined it and teamed up with two personalities who would figure in his life later on, Lester James Peries and Willie Blake.

He was an editor and was more articulate when it came to technical matters. Editing a film, never mind how easy it is today, wasn’t easy back then. There were clashes and there were moments where he thought of striking out on his own. That happened eventually, when with Lester and Willie he left the GFU to make the first localised product our cinema claimed, Rekava, which notwithstanding its less than nuanced attitude to its subject-matter went down in history as the first film from here nominated for the Palme d’Or at Cannes. The rest, as they say, is history.

There are times when technicians take to directing films. Titus edited more than 20 films, the good, the pedestrian, and the middle-of-the-road. Sooner or later, he would have preferred the director’s seat. And when that happened, he would have realised his own personal vision, free from the intermediaries who stood between him and that seat when he had to kowtow to whoever was making and producing a film.

Haralakshaya was a box-office hit. It represented everything Titus stood for when it came to the cinema: there were fight sequences, songs, side-plots, in short, a film that told a story and like all true stories entertained. It was also based on reality, a point he firmly drove home even in his other work: both Chandiya and Maruwa Samaga Wasaya were rooted in true stories, however, melodramatic they were and however much he fictionalised them to concede ground to the box-office. He was middle-of-the-road in the most conventional sense, a point one can discern quite clearly when comparing his take on Maru Sira with that of Amarnath Jayatilaka (in the latter’s Siripala saha Ranmenika).

His zenith, without a doubt, was Handaya. Handaya was a children’s story, true, but it was marketed at everyone. It bagged almost every accolade from here, from the OCIC, the Sarasavi Awards, and the Presidential Awards. It went abroad too, and at the International Children and Youth Film Festival in Giffoni, Italy, it won the coveted Grand Prix in 1980. The latter was special for one reason: Handaya was screened with no subtitles. The festival jury would doubtless have thought that subtitles weren’t really needed.

And they were correct. Years ago I watched Handaya. A few months ago I watched Giuseppe Tornatore’s Cinema Paradiso. The two films were worlds apart in terms of cultural context, but seeing the two of them I realised what the jury members may have thought in Giffoni in 1980: that a film which caught on with children and recounted an experience that struck a chord with the child in us all trivialised and paled language and cultural differences.

He didn’t stop with films of course. He moved on to television. In the end, he gave us a host of shows which pale almost anything that has come out of that medium to us ever since. Those shows, it must be added, also proved that a dubbed program could best its original by a considerable margin.

I know, for instance, of people who’ve watched Pissu Poosa but not Top Cat, who’ve watched Dosthara Honda Hitha but not Doctor Doolittle, and who’ve watched Walas Mama but not The Beary Family (which incidentally was made by the same man who gave us Woody Woodpecker, Walter Lantz). TV shows are like that I suppose, particularly when someone who knows his audiences transforms them into programs that outlive what they were adapted from.

Nalaka Gunawardene, in a beautiful tribute to the man, wrote that he was the closest we had to a Disney. He concluded, as did Nuwan Nawayanjith Kumara, that he could have been a Steven Spielberg in another country. Whether it was his misfortune or ours that he could not, I don’t know.

All I know is that we’ve contorted our notions of children’s art, because of which our directors make films undeserving of the “For Children” label. All I know is what Dharmasena Pathiraja once told me: “The trend is to go for films with children in them. When they incorporate children, their directors think they can add the whatever theme, subtext, and cultural dimension while retaining the ‘For Children’ label.” And all I know is that we have come back a long way since Titus Thotawatte’s death.

Malinda Seneviratne once wrote of him, “He made innocence possible. More importantly, he made it a worthwhile proposition.

There is an adult within me that is sad right now. There is a child within who cannot stop smiling. That’s what he gave and that’s a lot to give the world.” He wrote that immediately after the man’s death.

I can’t add anything else, not surprisingly. I was small when I heard of Titus Thotawatte. I’m not sure whether I know him that well even now, whether I can value his contribution or for that matter what he gave to every child in this country. I’m sure, however, that what he gave survives. And I know who to thank.